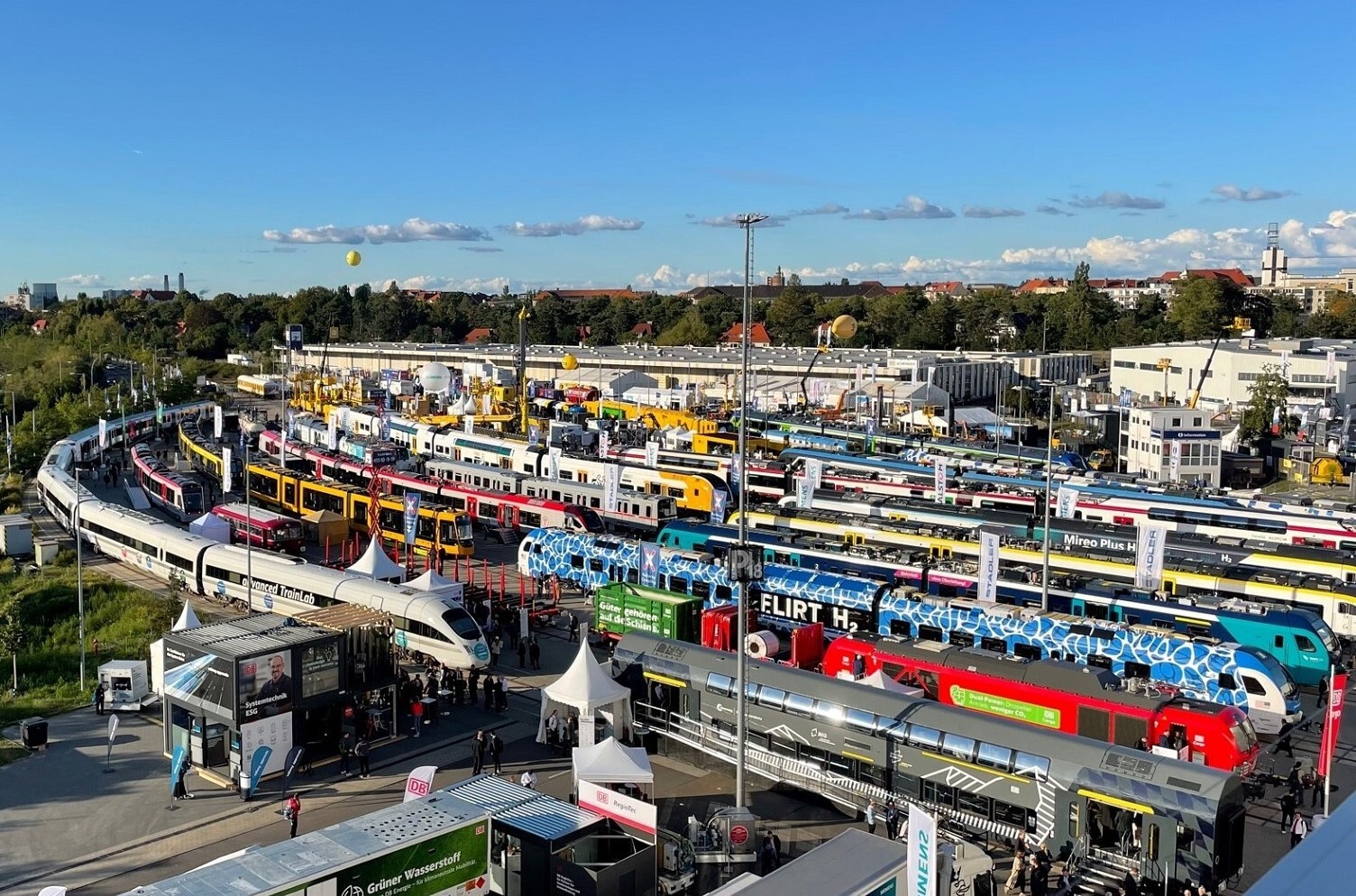 Germany: Alstom, Hitachi Rail, Siemens Mobility, Stadler and a number of other market players unveiled their trains at the InnoTrans exhibition in Berlin. Three new vehicles were exhibited among them. Stadler and Siemens Mobility showed their hydrogen traction solutions for passenger transport, while the Coradia iLint hydrogen train by Alstom took visitors to the exhibition site. At the same time, new solutions of locomotive-hauled passenger coaches were presented by Deutsche Bahn.

The FLIRT H2 hydrogen two-car train became one of the main novelties of InnoTrans 2022. The key difference between FLIRT H2 and two other hydrogen trains – Coradia iLint by Alstom and Mireo Plus H by Siemens – is in the layout of the fuel cells and tank. In Alstom and Siemens trains they are installed on the roof, whereas in the Stadler train they are installed between the cars in the intermediate section. At the same time, the principle of the FLIRT H2 power unit operation is in many ways similar to Coradia iLint and Mireo Plus H. In the fuel cell from Ballard, Hydrogen enters into a cold combustion reaction with oxygen in the fuel cell by Ballard. It results in the water formation and the generation of electricity that charges the roof-mounted traction batteries that also store regenerative braking energy. In turn, the batteries supply energy to the traction converter located on the roof, then the energy is transferred to the traction motor, which drives the wheels.

According to the manufacturer, FLIRT H2 can operate all day without refueling. However, the train is much inferior to Coradia iLint and Mireo Plus H in terms of the declared range (460 km versus 1,000 and 800 km respectively when compared in two-car versions). However, it is worth noting that on the eve of InnoTrans, the Coradia iLint train showed a significantly greater range in practice than stated in its specification: the train covered 1,175 km in Germany without refueling. 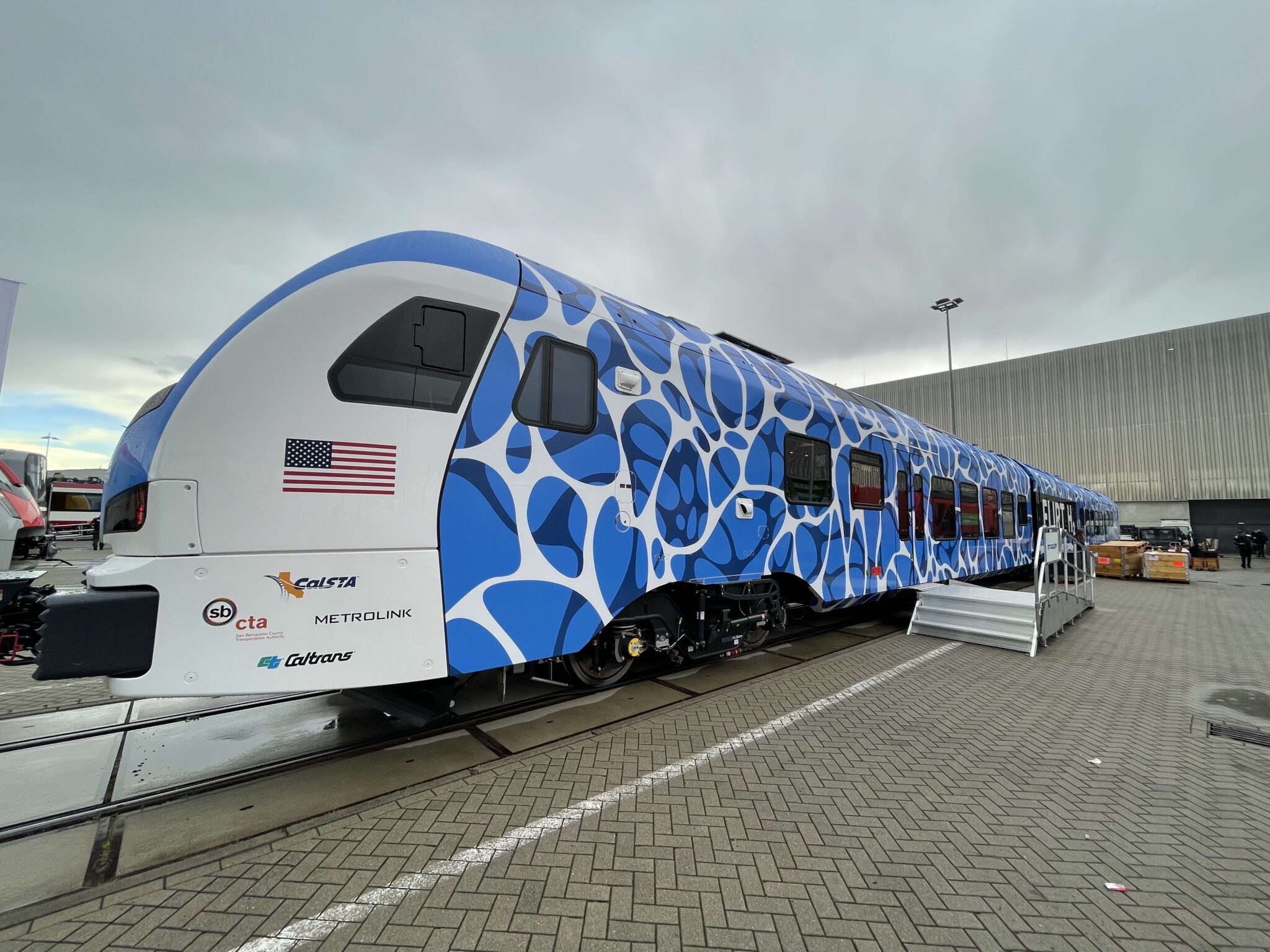 In addition, the FLIRT H2 also differs in terms of refueling time and max speed (30 min versus 15 min for Alstom and Siemens, and 130 km/h versus 160 km/h for both manufacturers). There are 108 passenger seats in the train. It is emphasized that FLIRT H2 is designed for operation at high ambient temperatures up to +49°C.

The presented FLIRT H2 train was produced by order of the San Bernardino County Transportation Authority in the USA. The corresponding contract for the supply of one train with an option for 4 vehicles more was signed in 2019. The first FLIRT H2 is due to enter service in 2024 on a 14 km line between the city of San Bernardino and the university complex. Also, at Innotrans 2022, Stadler signed an MOU with the California State Transport Agency (CalSTA) and California Department of Transportation (Caltrans) to supply four FLIRT H2s, with further 25 trains purchase being considered. 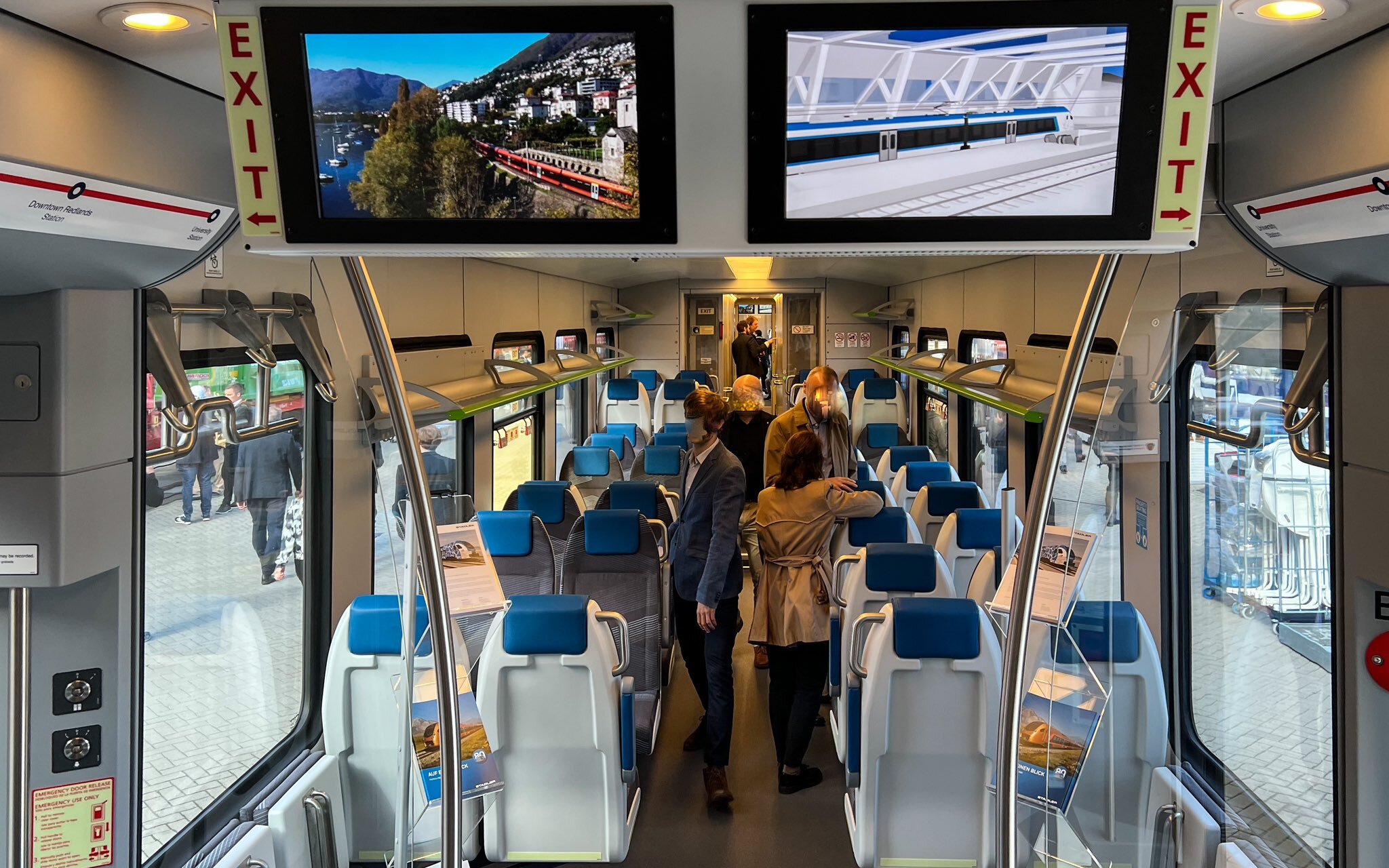 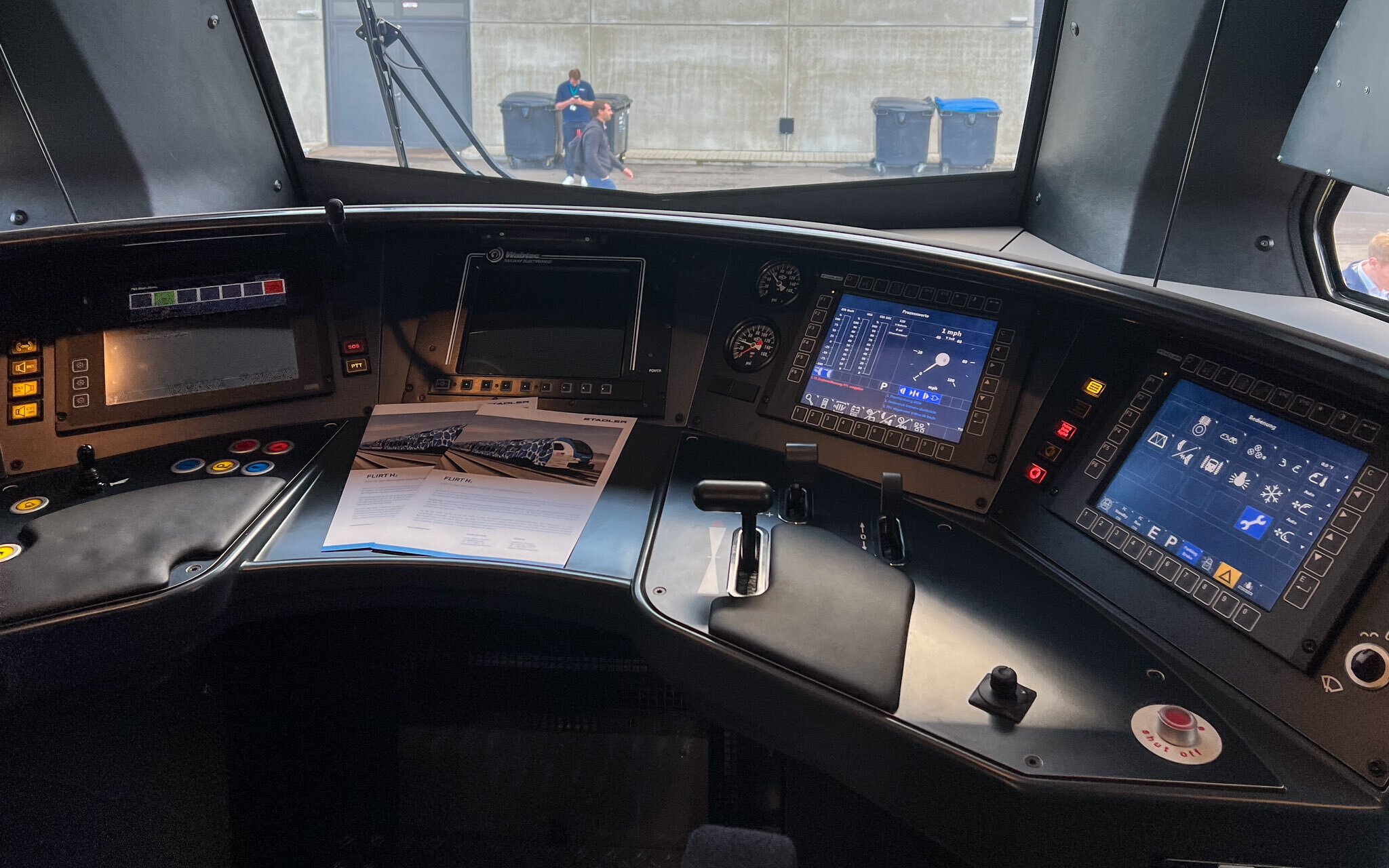 The control board of the FLIRT H2 hydrogen train by Stadler. Source: gleis3a/twitter

Another premiere presented by the Swiss manufacturer is the FLIRT TRIMODAL train with a tri-mode traction system including a power supply from AC catenary, batteries and a Stage V diesel engine of 480 kW power. The priority under operating conditions is the use of electric traction. The power unit which includes batteries and a diesel engine is located in an intermediate section between the cars. The maximum speed of the train is 120 km/h, the acceleration rate is 1.1 m/s². The car bodies are made of aluminum, and the front part of the driver’s cab is made of fiberglass reinforced plastic.

The contract for the supply of 17 four-car and 7 three-car FLIRT TRIMODAL trains was signed with the British TfW operator in 2019. The passenger capacity of the four-car train will be 204 people, including 158 seats, and for the three-car version it is 148 passengers with 118 seats. Now the vehicle is at the final stage of trials. It is expected that the first trains will be put into operation by the end of 2022. 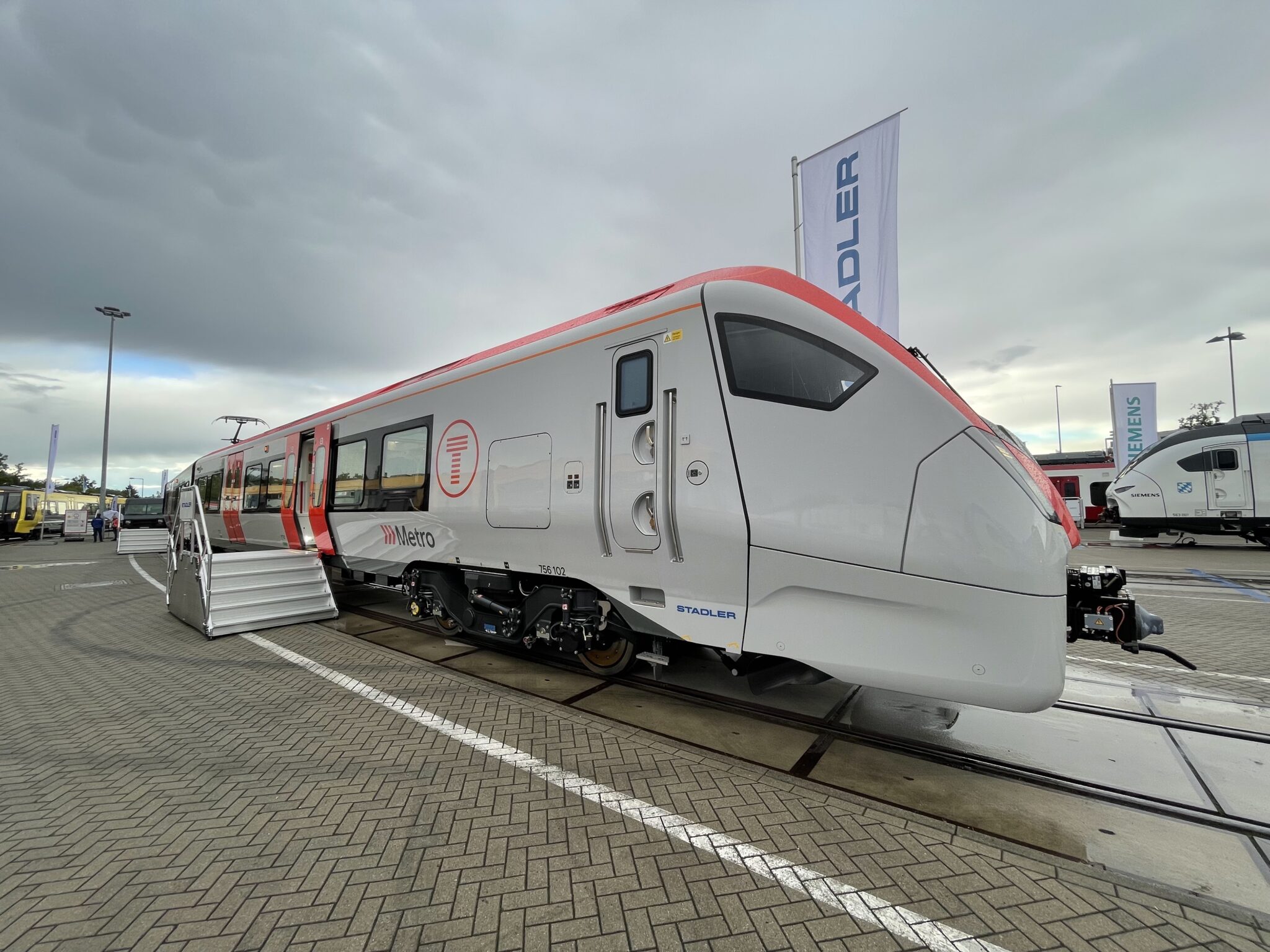 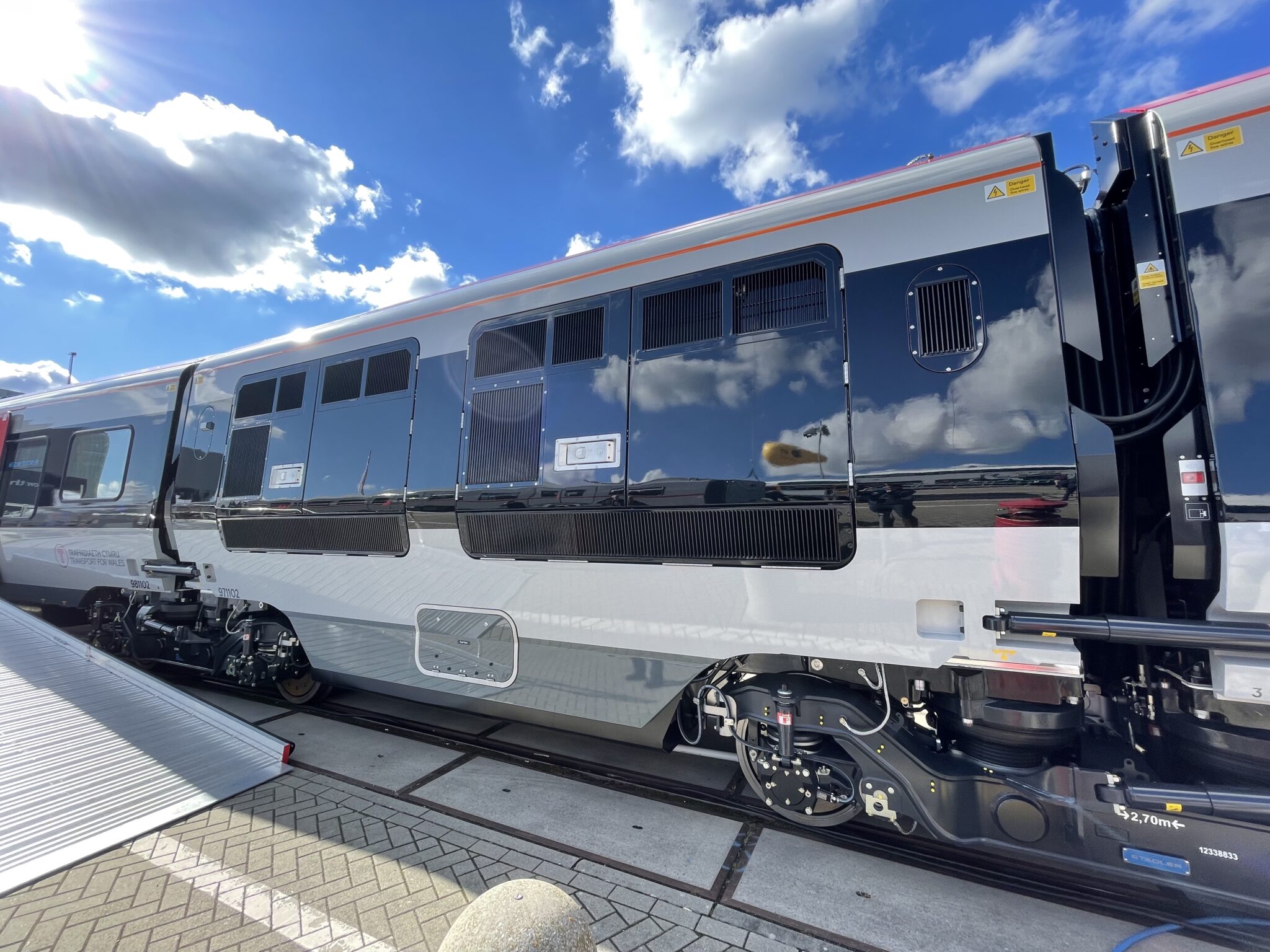 The power unit car of the FLIRT TRIMODAL train by Stadler. Source: railway-news.com 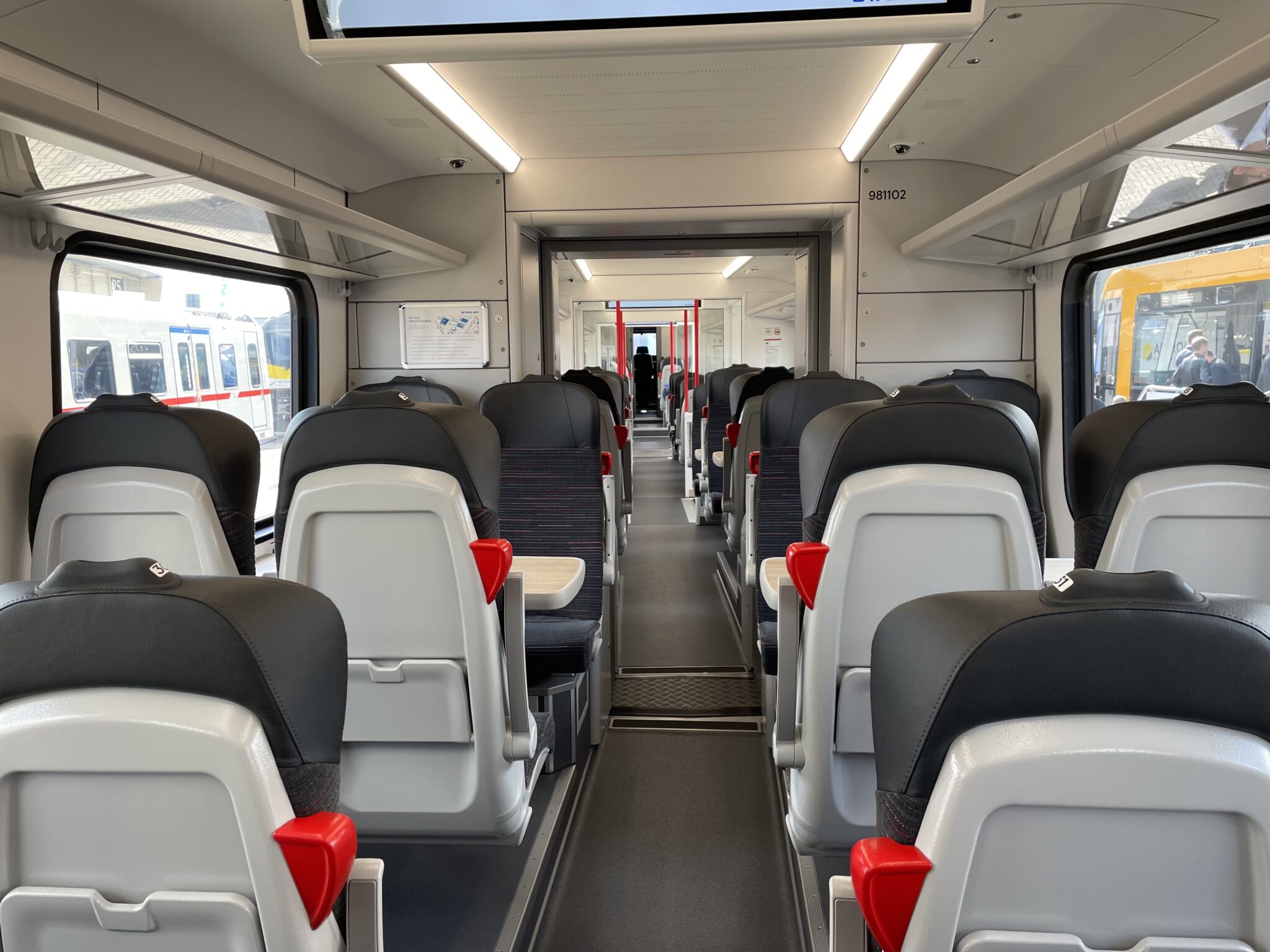 Stadler also exhibited another train of the FLIRT platform — a two-car hybrid FLIRT Akku powered by a catenary and batteries. Its premiere took place at the last Innotrans exhibition in 2018. In the summer of 2019, the producer signed a contract with NAH.SH in Germany for the delivery of 55 two-car FLIRT Akku trains and their maintenance for 30 years. One of the first trains for NAH.SH was presented at InnoTrans this year. It has 124 seats. The maximum speed is declared at the level of 160 km/h, the operational range in battery mode is 150 km (however, in winter 2021, the train set a record by traveling 224 km without recharging), and it is stated to take 15 min for a full charge of the battery. In total, NAH.SH should receive 5 such trains this year, the commissioning of the rest is scheduled from May 2023 to mid-2024. 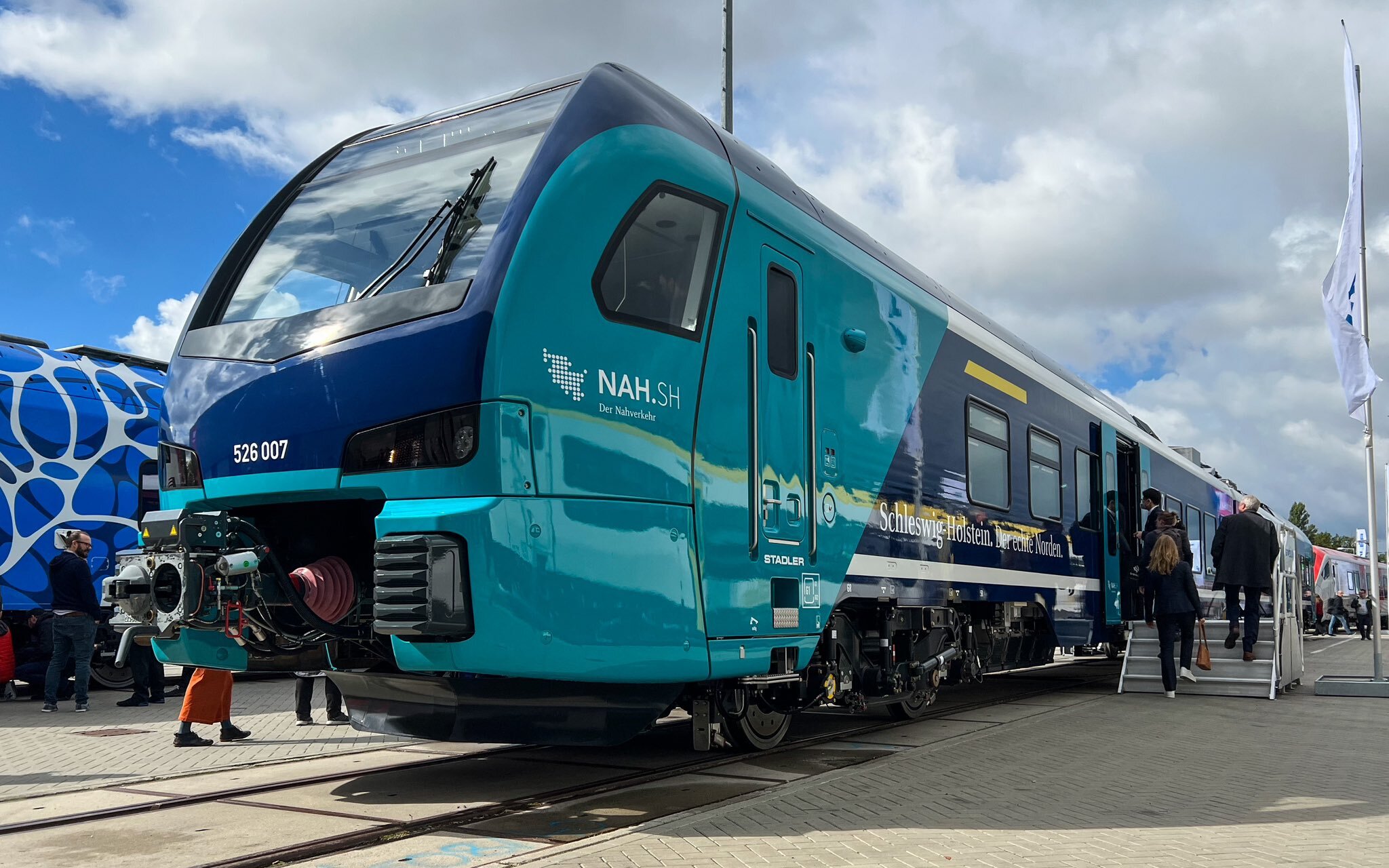 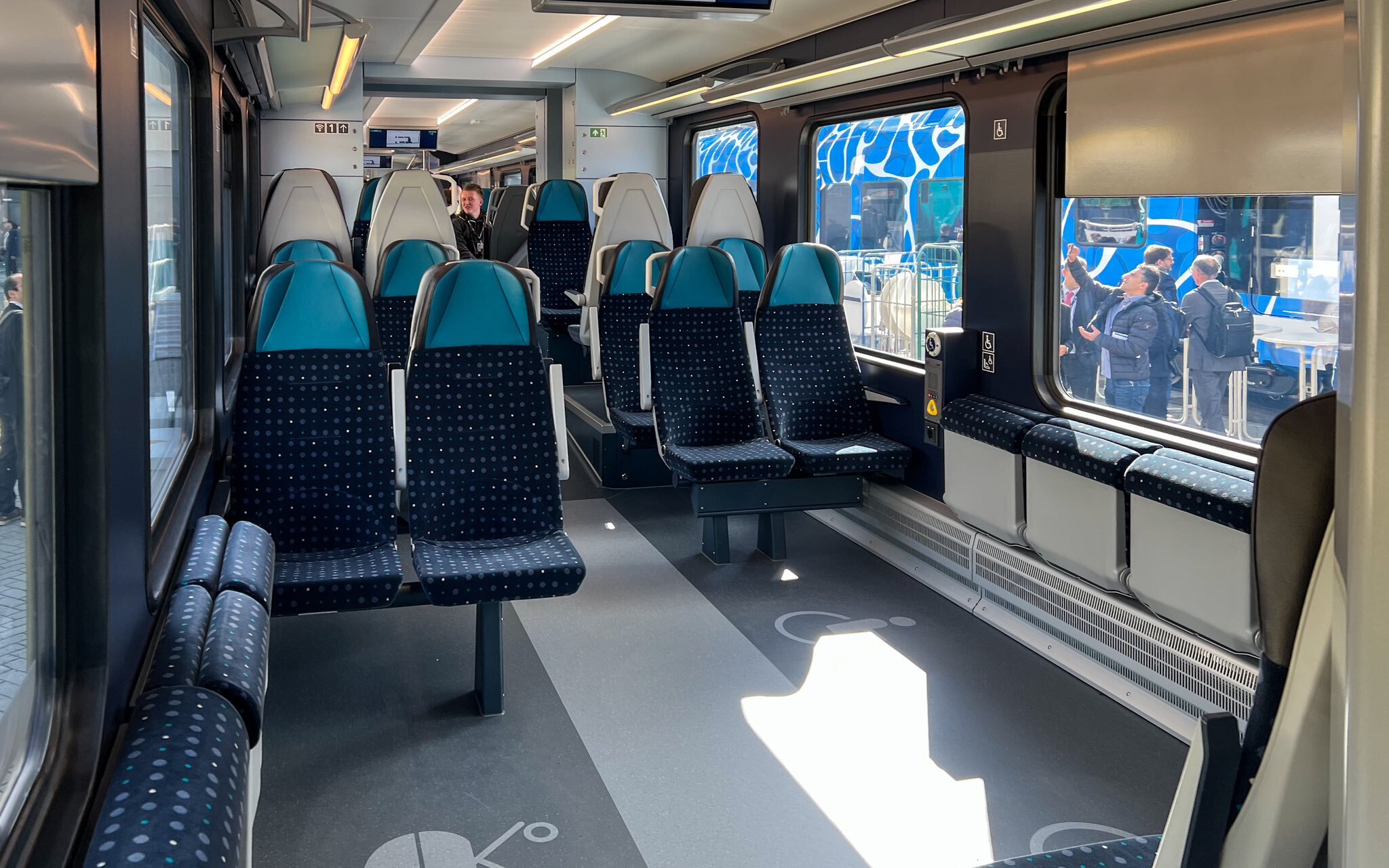 Mireo Plus B hybrid train from Siemens Mobility

Another novelty was the Mireo Plus B two-car train powered by a catenary and batteries. It was produced for Baden-Württemberg region of Germany. The corresponding contract was signed in 2020 and includes the delivery of 27 such trains from the end of 2023. Siemens’ backlog also includes two contracts for the supply of 38 Mireo Plus B trains for the NEB operator in Germany and Midtjyske Jernbaner in Denmark. According to the manufacturer, the operational range of the train is 80 km, and the maximum speed is up to 140 km/h. The two-car version provides 120 seats. Li-Ion batteries with a long service life are located in two containers under car bodies and can be charged both from the catenary and by regenerative braking. 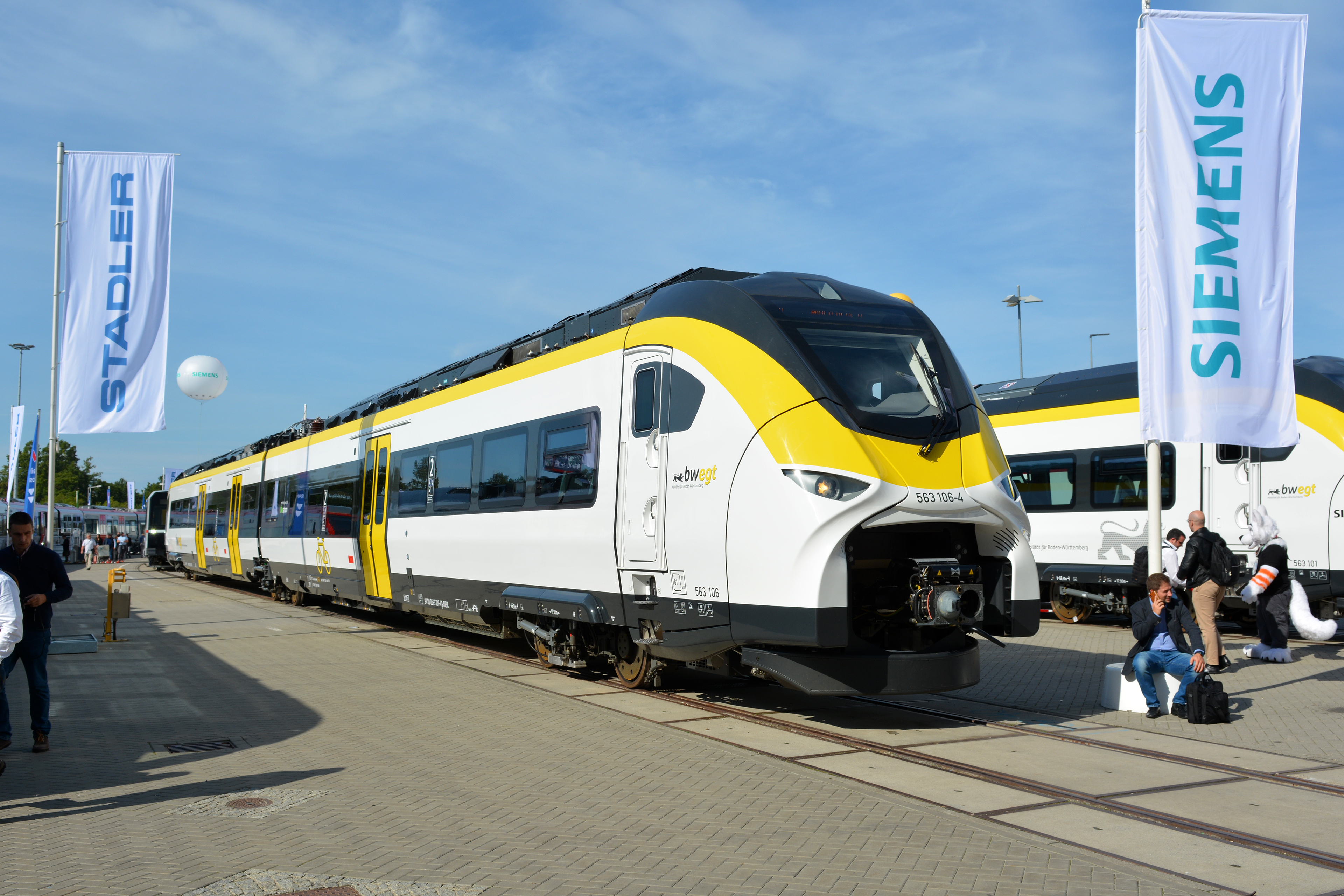 Mireo Plus B hybrid train by Siemens. Source: railway-news.com 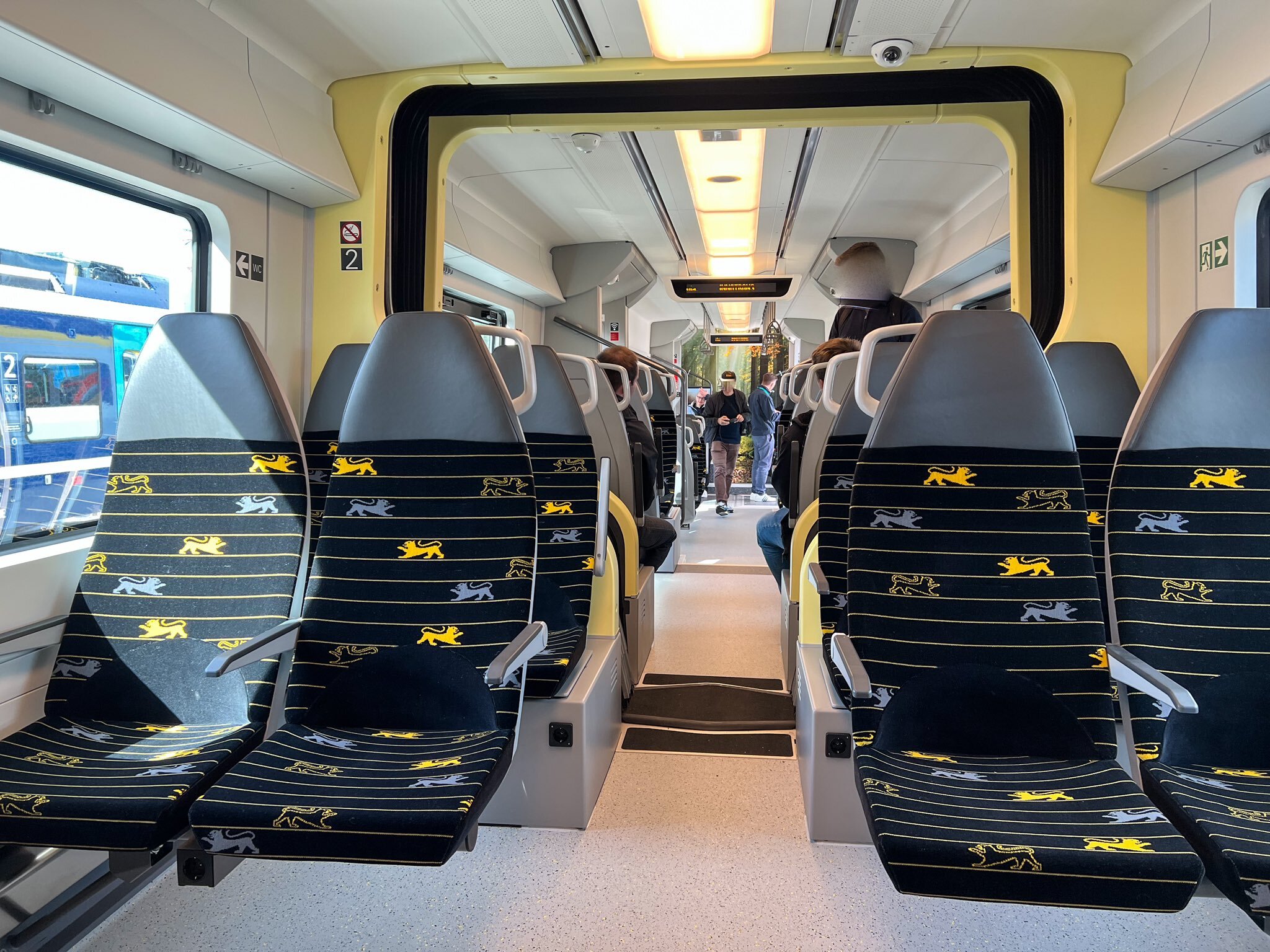 Interior of the Mireo Plus B train. Source: gleis3a/twitter

Also, the Mireo Plus H hydrogen train was presented at InnoTrans, however it was first shown to the public in May this year. Prior to this, the NEB operator made the first order for the supply of 7 such two-car trains. It is planned that the rolling stock will go in operation starting at the end of 2024. In addition, Siemens showed a partially double-deck Desiro HC electric train for the ODEG operator in Germany. Under the contract, the producer is to supply 21 six-car trains with 637 seats and 2 four-car trains with 400 seats. Head cars will be single-deck, and intermediate cars will be double-deck. 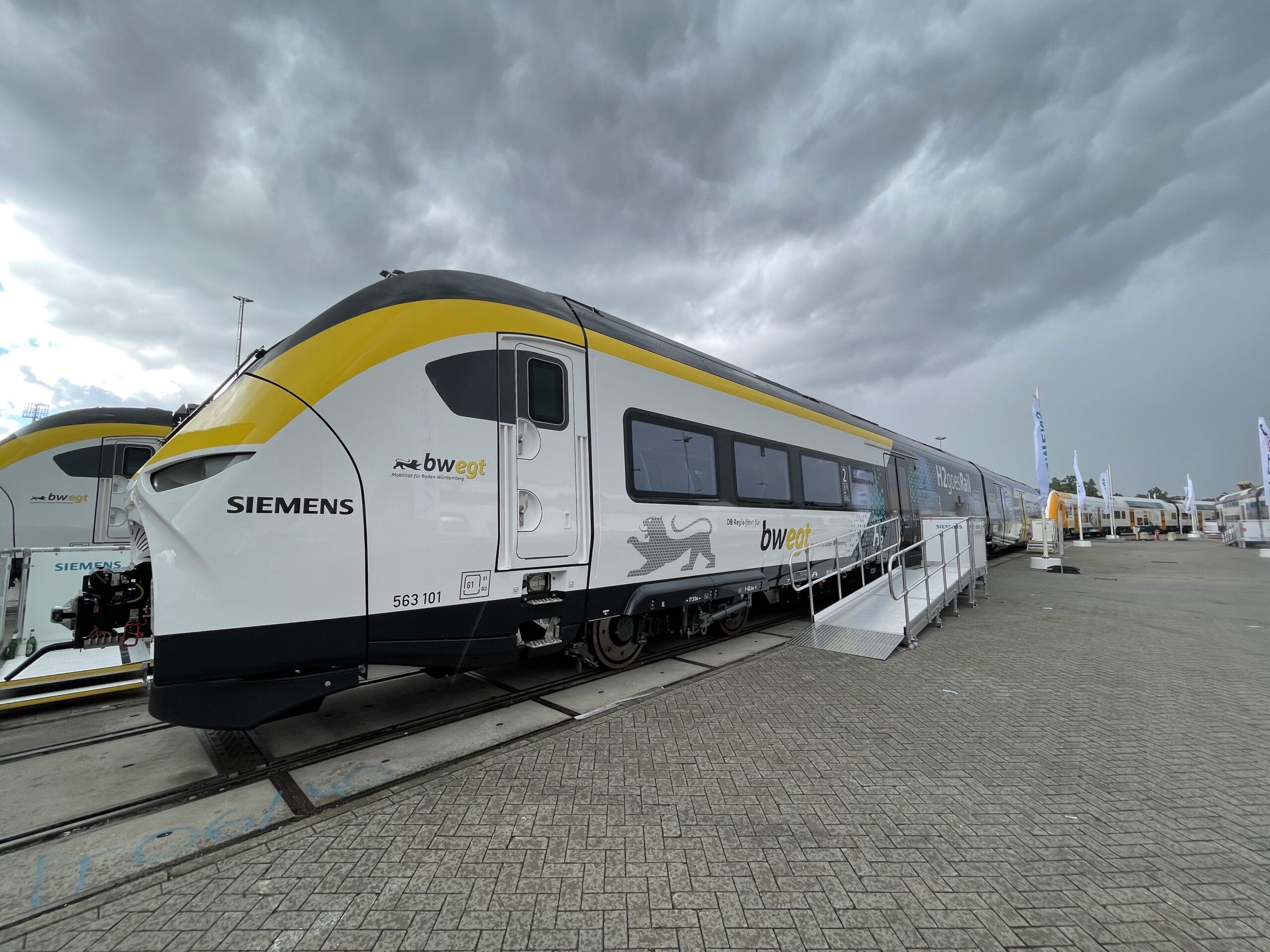 The French manufacturer has presented a partially double-deck Coradia Stream HC electric train for the state CFL railway company of Luxembourg. As in the case of the Desiro HC, the lead cars are single-deck, and the intermediate ones are double-deck. The train can reach speeds of 200 km/h and is equipped with a GoA2 automation system. In total, CFL ordered 34 such trains in 2018, and they will be gradually introduced into service from the summer of 2023. Also, Alstom launched its Coradia iLint hydrogen train on the line between Berlin-Spandau and Berlin-Ostbahnhof stations during the exhibition. One of the stations on the route is located next to the Messe exhibition center, where Innotrans traditionally takes place. 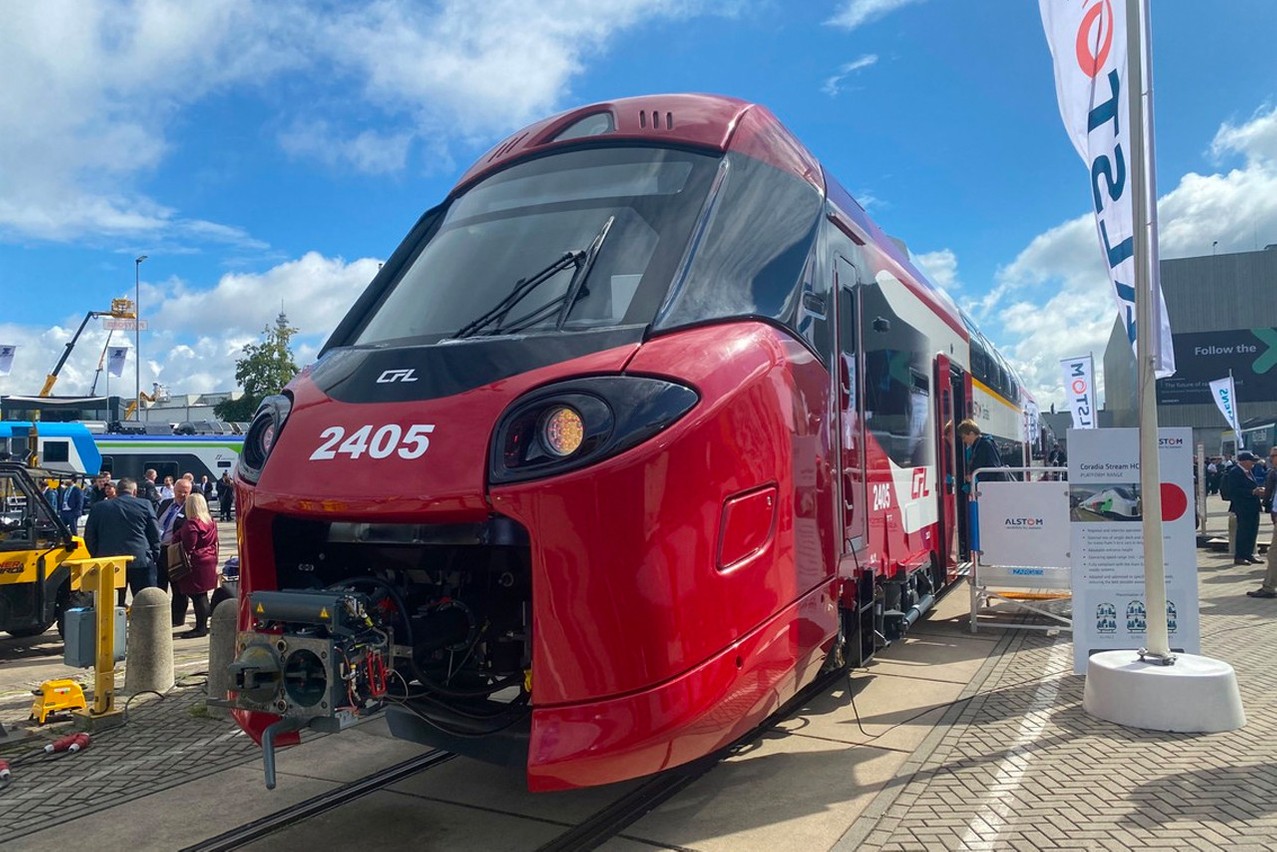 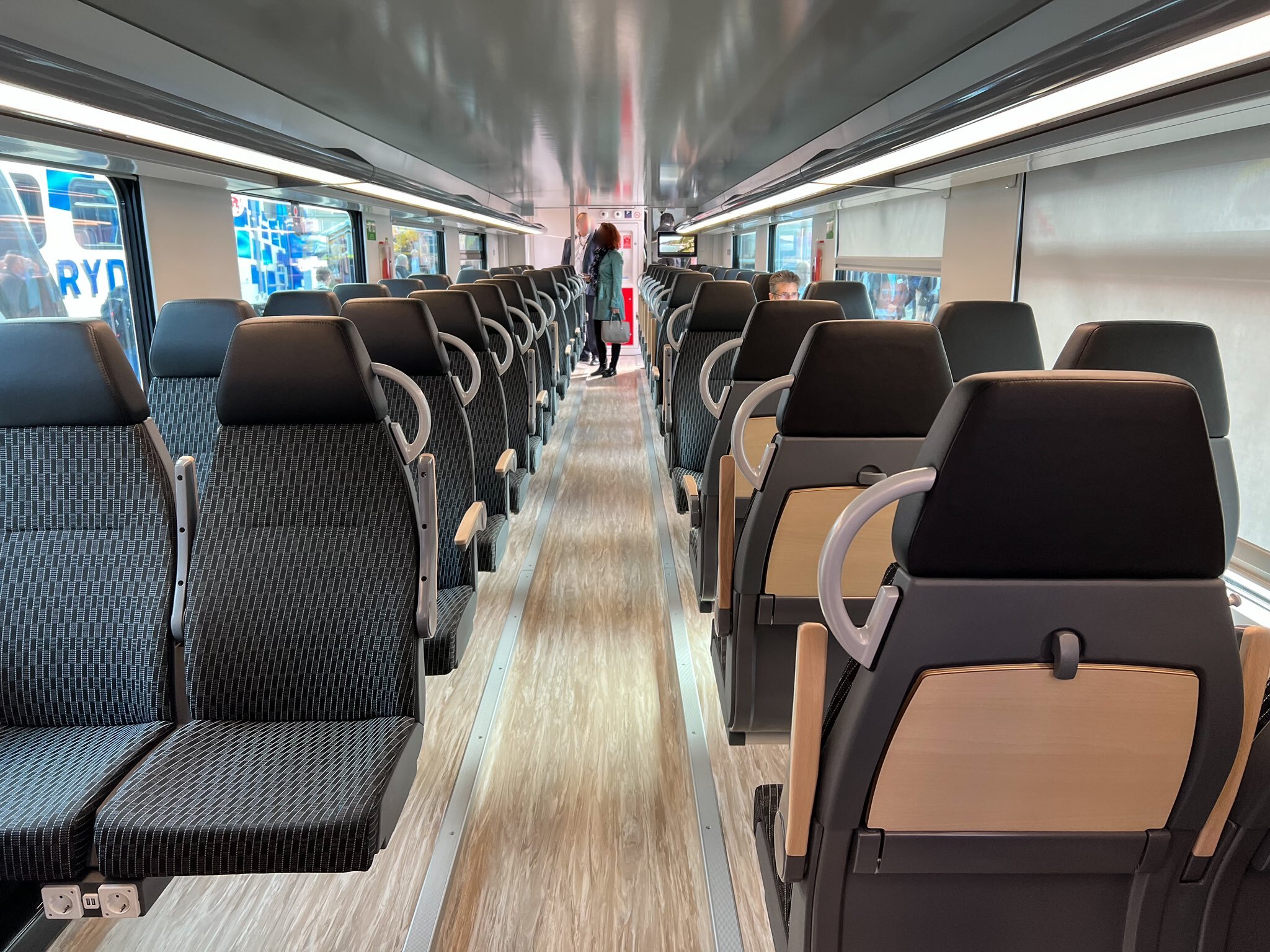 Hitachi Rail exhibited for the first time the four-car Blues train with a hybrid power plant with traction from a diesel engine, a catenary and batteries. Previously, only a mockup of the head car was shown in several Italian cities. The Blues hybrid trains were designed on the basis of the Caravaggio platform specifically for participation in the Trenitalia tender for the delivery of up to 135 such trains to various regions of Italy. The first Blues trains should be supplied to the Tuscany region by the end of 2022, with entry into service scheduled for 2023.

Blues trains can reach a maximum speed of 160 km/h with an acceleration rate of 1.1 m/s2. The diesel engine of the new train complies with Stage V emission standards. Depending on the composition of the train, the vehicles were named HTR.312 (three-car) and HTR.412 (four-car). HTR.312 with a length of 66.8 m can accommodate 224 passengers, while HTR.412 with a length of 86 m is ready to provide transportation services for 306 passengers. 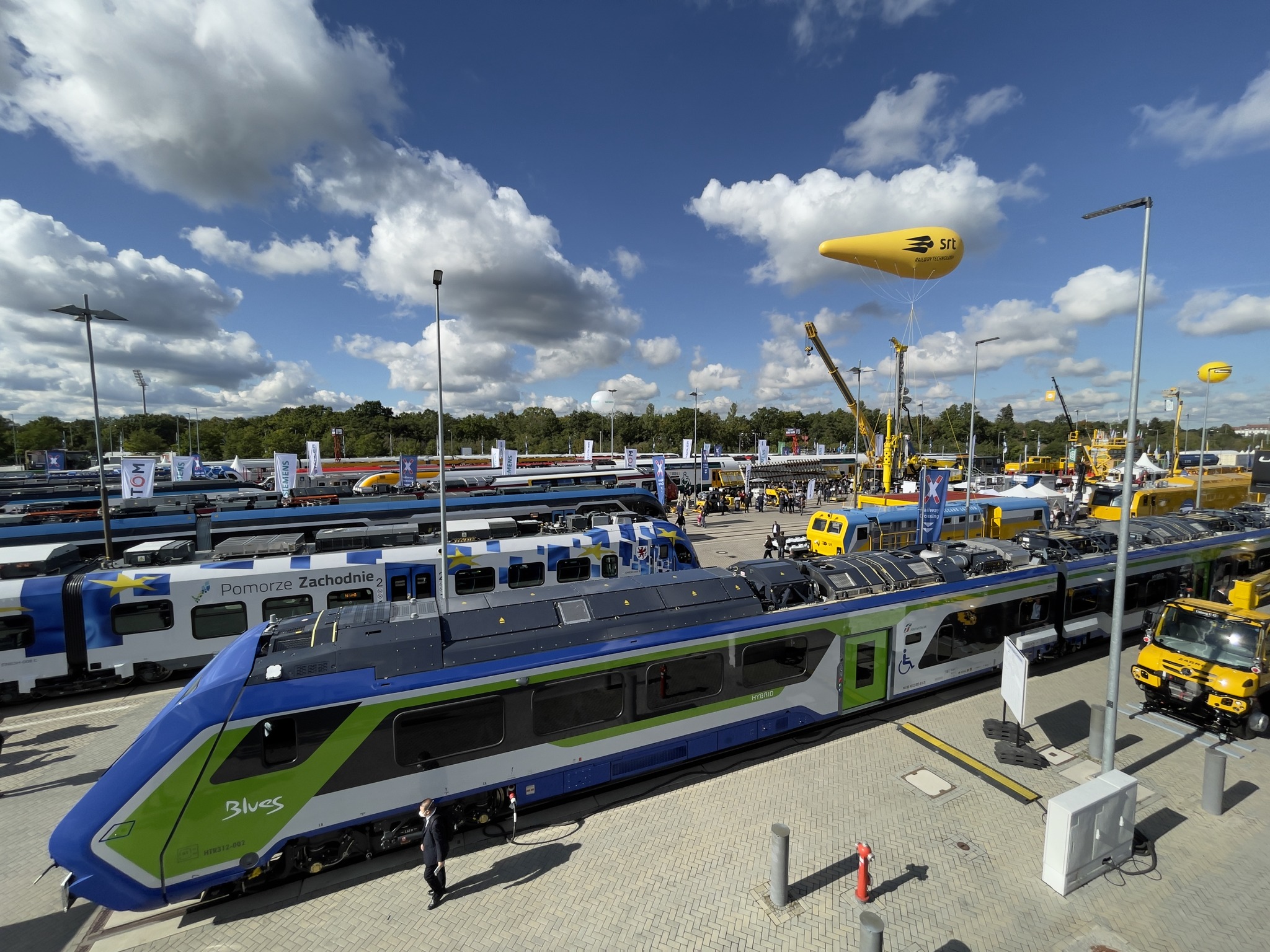 Trains by other manufacturers

Vehicles by Polish manufacturers Newag and FPS could also be seen at InnoTrans. The first producer presented the Impuls 2 diesel train equipped with a supercapacitor. The new technology allows to overcome up to 500 m in battery mode and reduce fuel consumption by 17%. The supercapacitor is charged by regenerative braking energy, which according to Newag is ideal for suburban agglomerations with a large number of stops. By the end of 2022, Newag plans to deliver 12 such trains to the West Pomeranian Voivodeship in Poland. 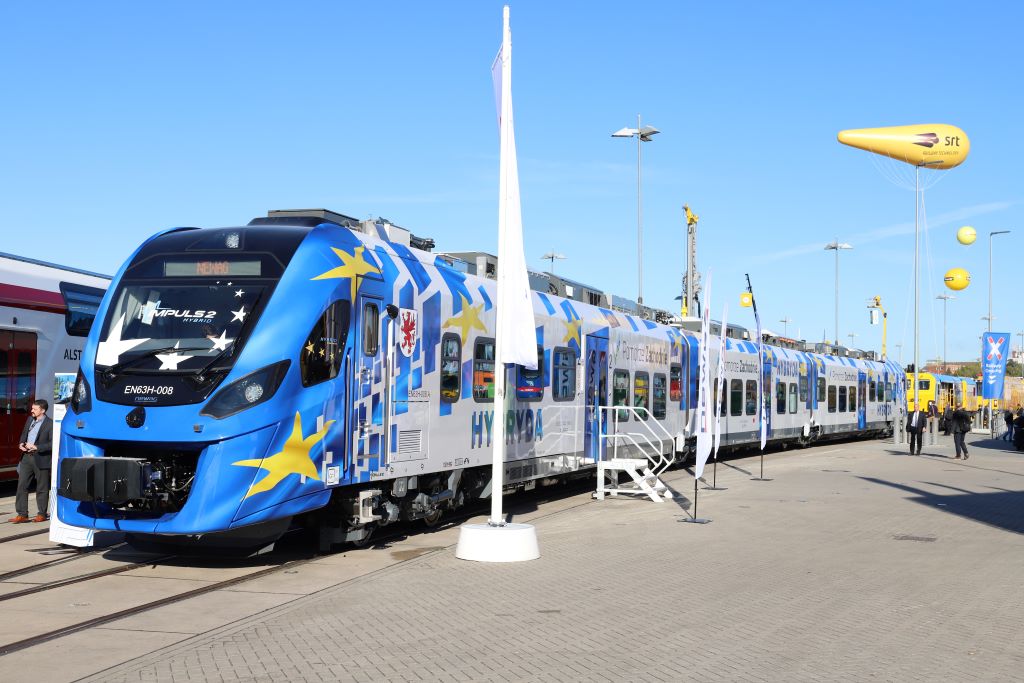 The Impuls 2 diesel train by Newag, equipped with a supercapacitor. Source: urban-transport-magazine.com

Also, FPS showed a prototype of the two-car Plus hybrid train, which also premiered in 2021 at the TRAKO exhibition in Gdansk. The train is powered by four 390 kW asynchronous diesel engines, Stage V compliant, and two batteries which allow operation with an output of 800 kW. According to FPS, switching from one traction mode to another takes a few seconds. The passenger capacity of the two-car train is 270 people. 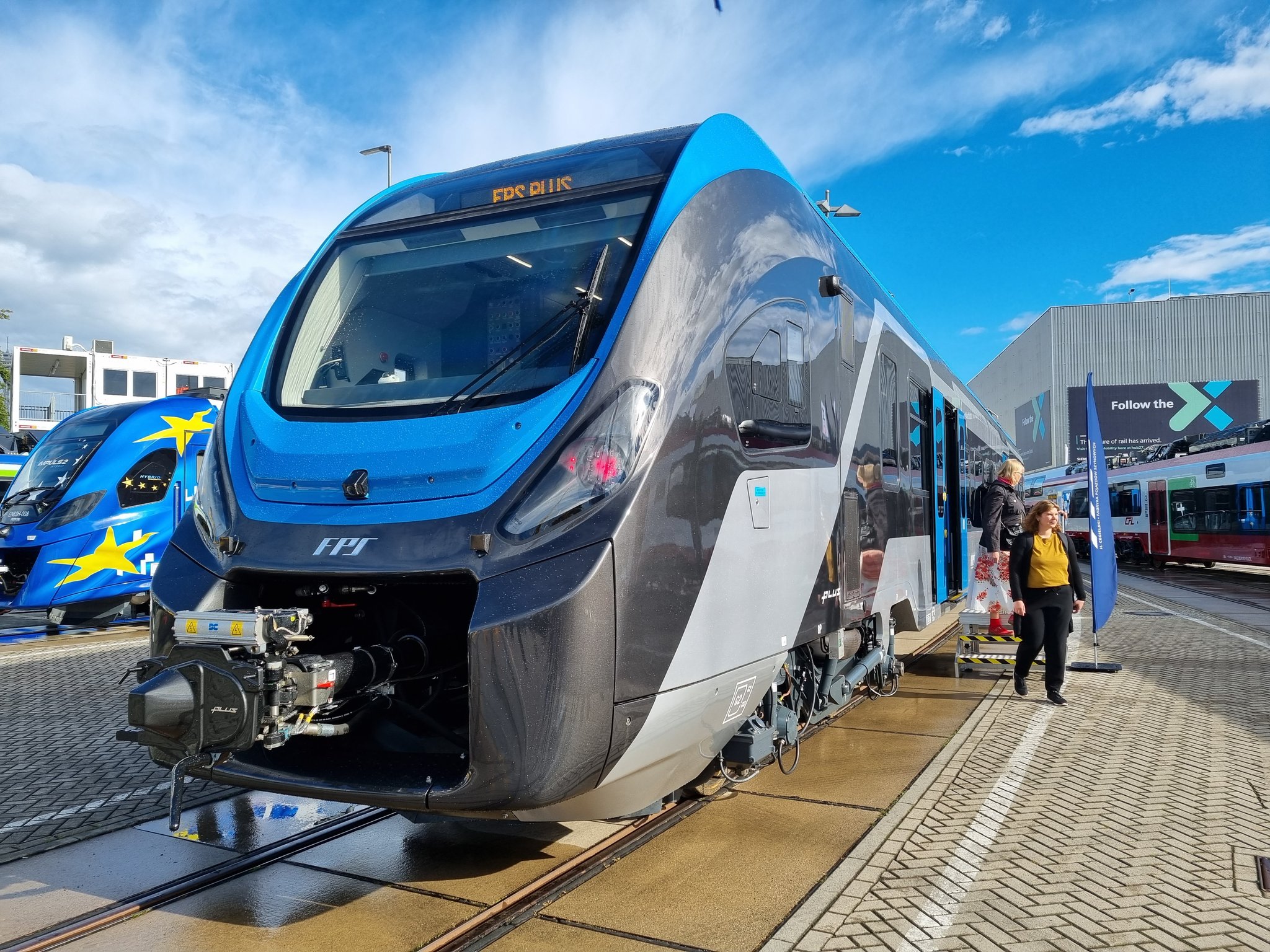 The Plus hybrid train by FPS. Source: andpe41/twitter

The display of Deutsche Bahn passenger coaches included Talgo’s low-floor ICE L locomotive-hauled coaches and a full-scale Ideenzug (“IdeasTrain”) double-deck coach. DB itself announced significant plans for investment in rolling stock during the exhibition: the company plans to allocate €19 bln for its purchase until 2030.

The premiere of the first ICE L train coach took place on the eve of InnoTrans. Talgo claims they will be 20% lighter per passenger than competitor’s trains, primarily due to the Spanish manufacturer’s unique undercarriage technology solution called Rodal. It allows using one single-axle bogie per coach in the area of articulation with another coach. The 17-coach trains will have 562 seats, and the doors will be located at the level of platforms with a height of 760 mm. A firm order for 23 trains worth €550 mln was placed in 2019, and the framework agreement includes a potential supply of up to 100 trains. The rolling stock should begin to be handed over to Deutsche Bahn from the second half of 2024. 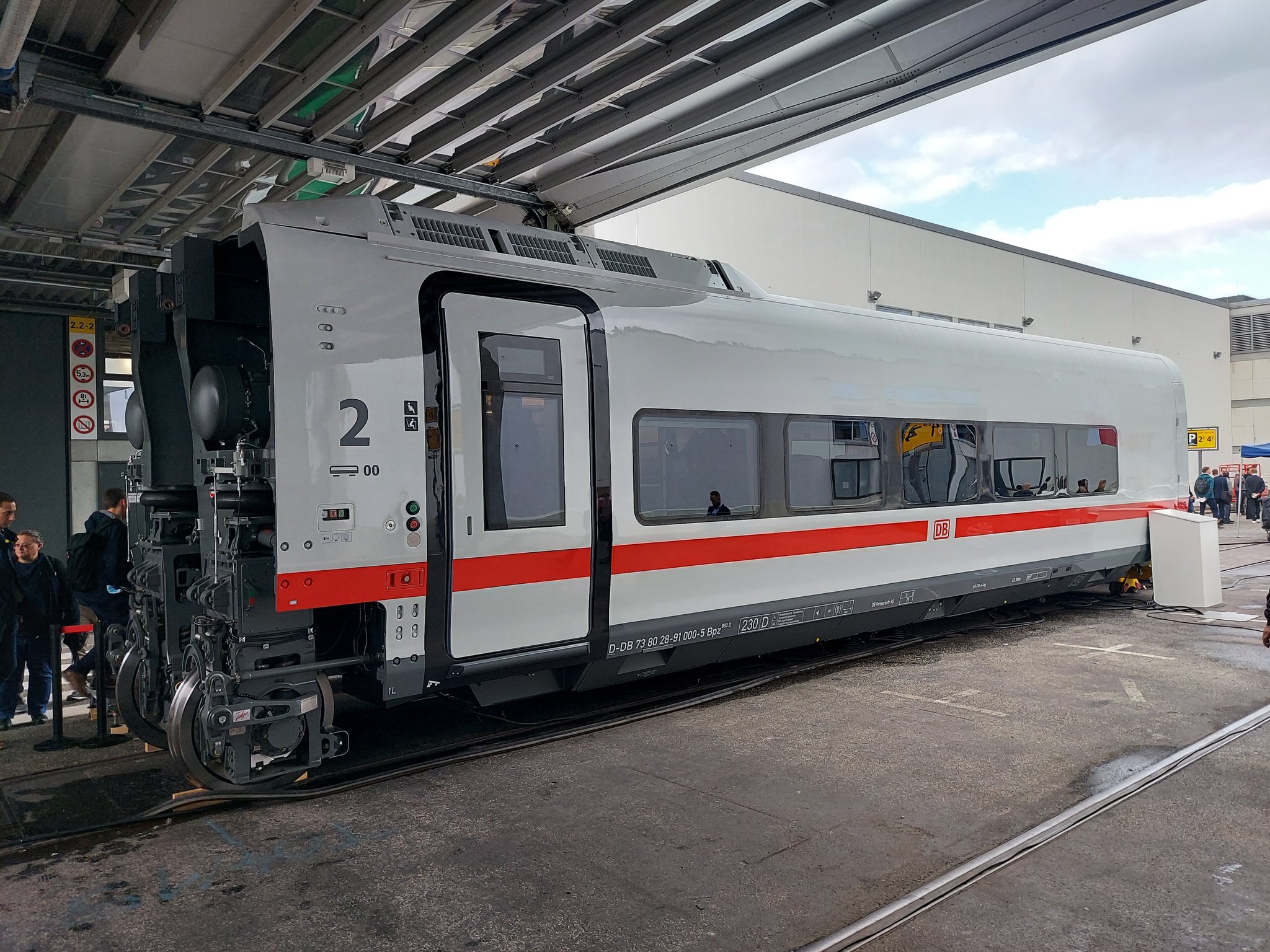 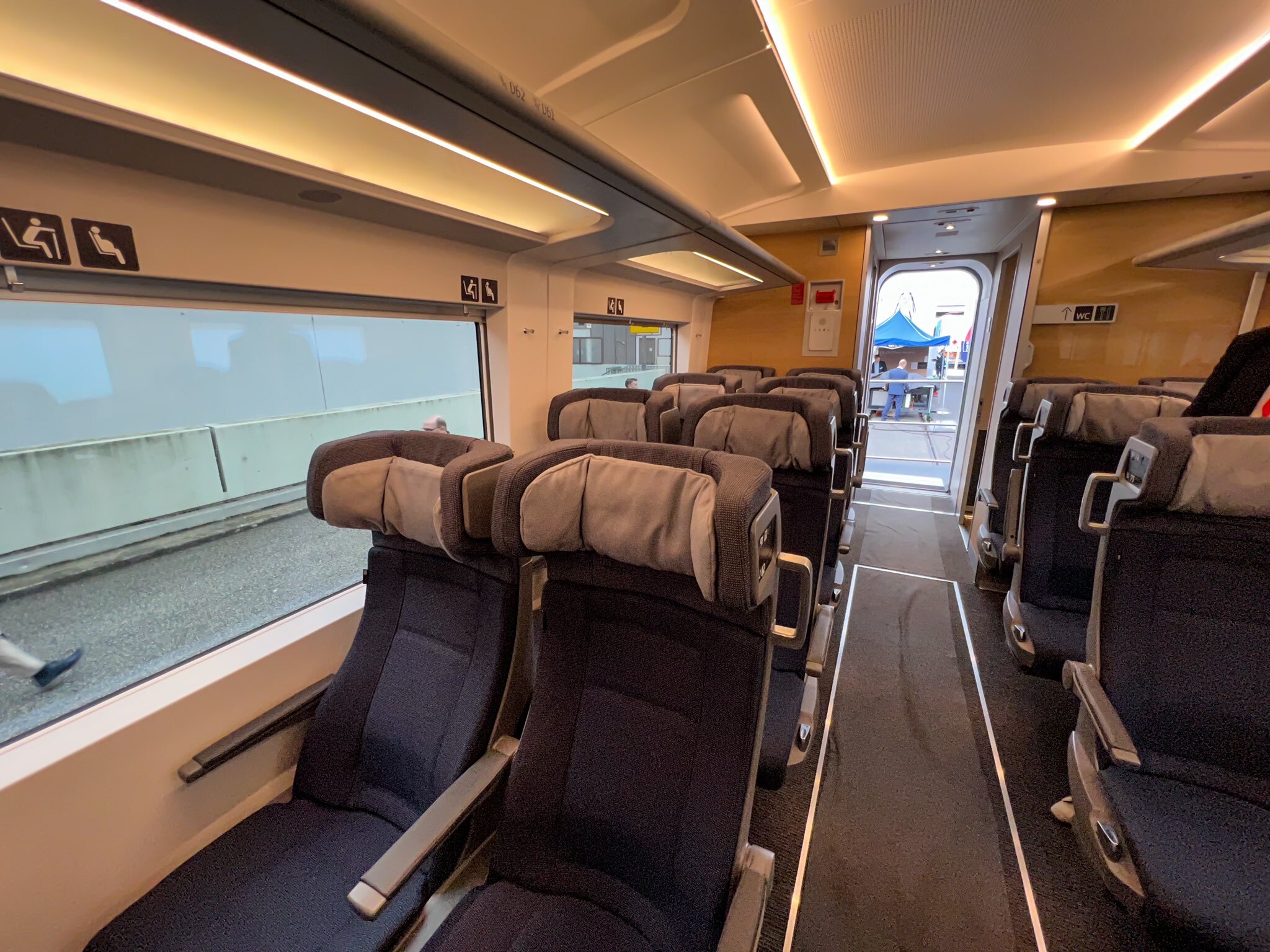 Also, the concept of the Ideenzug (“IdeasTrain”) double-decker passenger coach was developed for regional transportation by Deutsche Bahn jointly with the railway company of Bavaria (BEG) and the Neomind design studio. It involves the integration of 4 areas in the coach: an office to work, a table room for communication, a family area, as well as the seating zone with ergonomic seats. The project received state support in the amount of €1.5 mln. It is planned that this coach will go into regular operation in Bavaria from March 2023. 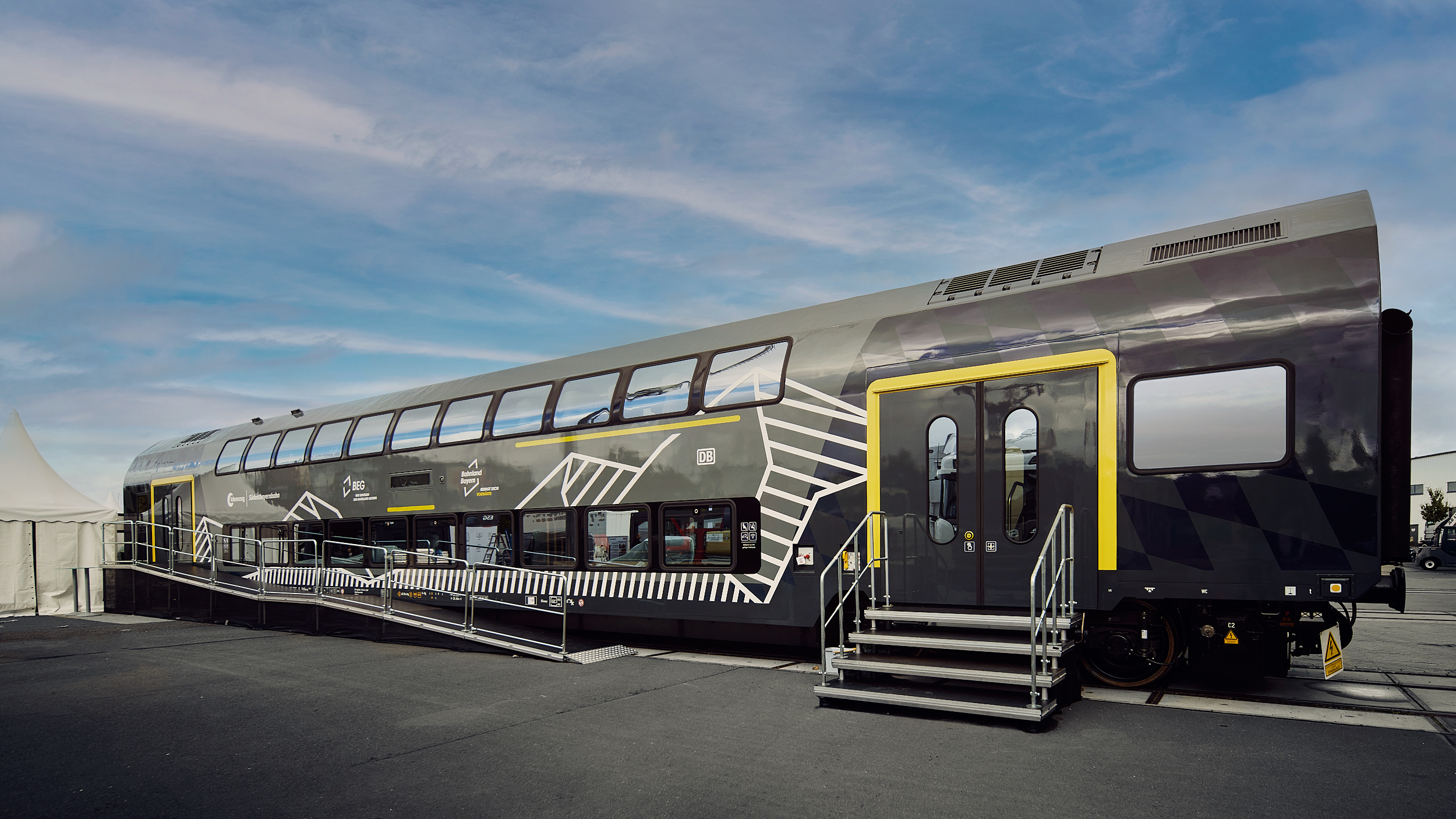 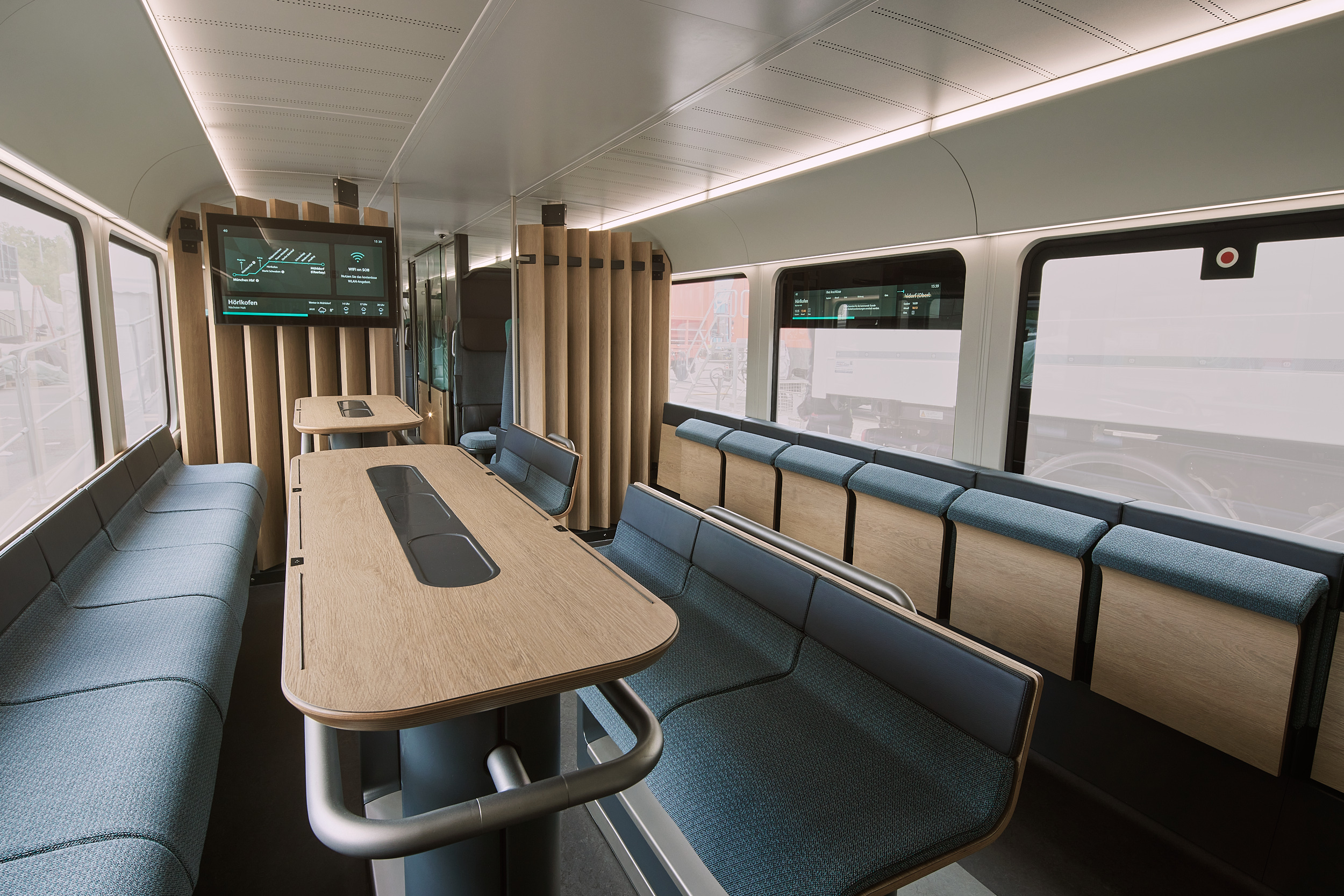 The interior of the Ideenzug double-deck coach. Source: Deutsche Bahn

Deutsche Bahn also showed the Advanced TrainLab train from Siemens Mobility. The first such train was put into operation in December 2018, and the second – in August 2021. Two mobile laboratories are being used for digital research on the German railway network. A high-speed four-car ICE-TD diesel train is used as a base for it.